Flying with your pet is becoming so much more common that large airports are starting to create animal airline terminals. Many airports have not yet upgraded to a full-on dedicated terminal but others, like JFK in New York, are building one right now. Here’s some information about cities that have pets services and pet terminals near you.

Dubbed “The Ark,” JFK’s terminal just for pets is slated to open in early 2016. The terminal is estimated to be 178,000 square feet at a cost of around $48 million. This terminal estimates that it will provide both land and air services in order to board, quarantine or transport large and small animals.

Also available will be an aviary for birds and an onsite veterinarian if one is needed. Climate-controlled vehicles will shuttle pets from planes to terminals and other airport areas.

Although this airport does not have a designated animal terminal, it does have a convenient pet relief area just outside terminal B. It’s a grassy area outside the east end of the building that provides a place for you to take your pets.

They also arrange outings for people with service animals to familiarize themselves with the airport which is the type of outreach program that is catching on at other airports.

This airport has a terrific pet boarding facility called “Now Boarding.” You can drop off your pet, park there and then take a shuttle to the airport. When you return from your trip, Now Boarding will pick you up and reunite you with your best furry friend. This service is offered 24 hours a day, seven days a week.

And you don’t have to be an airline passenger to use Now Boarding’s services. They offer things like spa treatments for grooming and massage, dog training services and even doggie daycare.

While not every major airport has a dedicated terminal for pets, many of them are very pet friendly. Check out your local airport to see what services they offer.

Don’t these make flying with pets so much easier?! 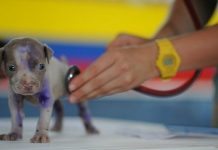